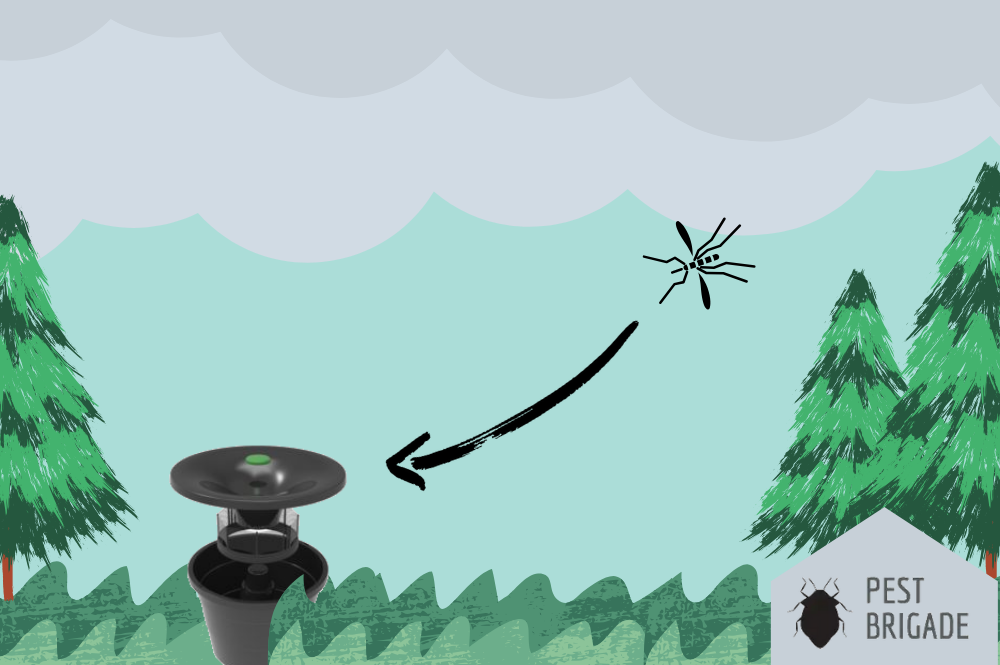 If you basically live outside during the summer, you’re no stranger to battles against mosquitoes. There’s no need to spend thousands on coil rings, ineffective DIYs, or sticky traps anymore. There’s now a fool-proof solution to get rid of mosquitoes with the In2Care Mosquito Trap.

The In2Care mosquito trap will bait, trap, and kill any mosquitos who dare enter your backyard. Everyone dreads having swarms of annoying mosquitos in the summer. Plus, mosquitoes can also spread diseases like Yellow Fever or the Zika Virus.

This system offers homeowners a hassle-free solution to rid their property of mosquitos without spraying harmful chemicals. In2Care is available in all states, with the exception of:

In order to have the system installed, you will need the help of an exterminator. We spoke with a trusted and experienced exterminator to get some answers about why she always recommends it for anyone with a mosquito problem.

How Does The In2Care Mosquito Trap Work?

The In2Care Mosquito Trap is an in-ground system that specifically targets mosquitoes. Unlike some of the other methods you’ve probably tried, this system even kills mosquito larvae.

The fungus kills adult mosquitoes within a couple of days as it penetrates the body. Since the fungus continues to spread among other mosquitoes, your property will be protected all summer long from mosquitos.

Is The In2Care Trap Safe?

The In2Care trap won’t harm birds or other wildlife that go near it. It uses potent chemicals only meant to kill mosquitos. So far, there have been no reports of human or wildlife harm from using the In2Care trap. This system is US-EPA approved.

In2Care suggests that the system can last for several years, but the floating gauze must be replaced regularly. They also recommend using their system in places with lots of mosquito activity such as shady or highly vegetated areas. Your exterminator will be able to help you find the best place to install your In2Care trap.

What Do Exterminators Think of In2Care?

To get the In2CAre trap in your yard, you’ll need a qualified exterminator to install the system. For this review, we asked Lisa, an experienced exterminator who has used this trap, what she thought of the In2Care system. Lisa is an exterminator and successful business owner from Houston, Texas. She owns her own pest control company and is highly involved in the pest control community.

Our team at Pest Brigade collaborated with her to talk about why she uses the In2Care system.

Q: Why do you recommend using the In2Care system, and what makes it so powerful?

I love it because it is targeted. No bees and no butterflies will be harmed by this system, unlike misting and fogging.

What makes it powerful is that it is working 24/7, rain or shine.

Mostly it’s the training. I’ve been installing the systems for three seasons now. The first year I even had some failures. You really need the right training to understand proper placement for the best protection.

Q: How long does the system last for?

The traps need to be refreshed monthly during the season.

Q: How long does one season last for you?

In Houston I set up the traps towards the end of March and pick them up in November.  Seasons vary based on how far north you are.

Pest Brigade recommends consulting with an exterminator in your area to see how long you should expect your system to last.

Q: How do you install the system and how long does installation take?

Installation is quick and easy once proper locations and distances have been established. I can usually install a system in half an hour in a standard backyard. Large areas will take longer.

Q: What else should you expect during the installation and while the device is first working?

It takes two weeks after installation to start seeing results. This is because mosquitoes prefer to breed in stale water, and we fill the traps with clean water when we install them.

Q: How do you know the device is working properly?

Besides not getting eaten alive? You can open the traps and see the wriggling larvae stuck in there. It’s awesome to see.

How Do You Get the In2Care System?

For estimates on In2Care installation, call a local pexterminator for a consultation. An exterminator will need to inspect your property and assess what’s best for your infestation. Depending on how large your yard is, the price on installing the In2Care trap may change.

To connect with an exterminator familiar with installing the In2Care trap, call Pest Brigade. We work with local and qualified exterminators. Calling is the easiest way to instantly find an exterminator in your zip.

Also Read: Why Do Mosquitos Bite Some People More Than Others?