The WSDA Reports More Sightings of Asian Giant Hornets (May, 2020) 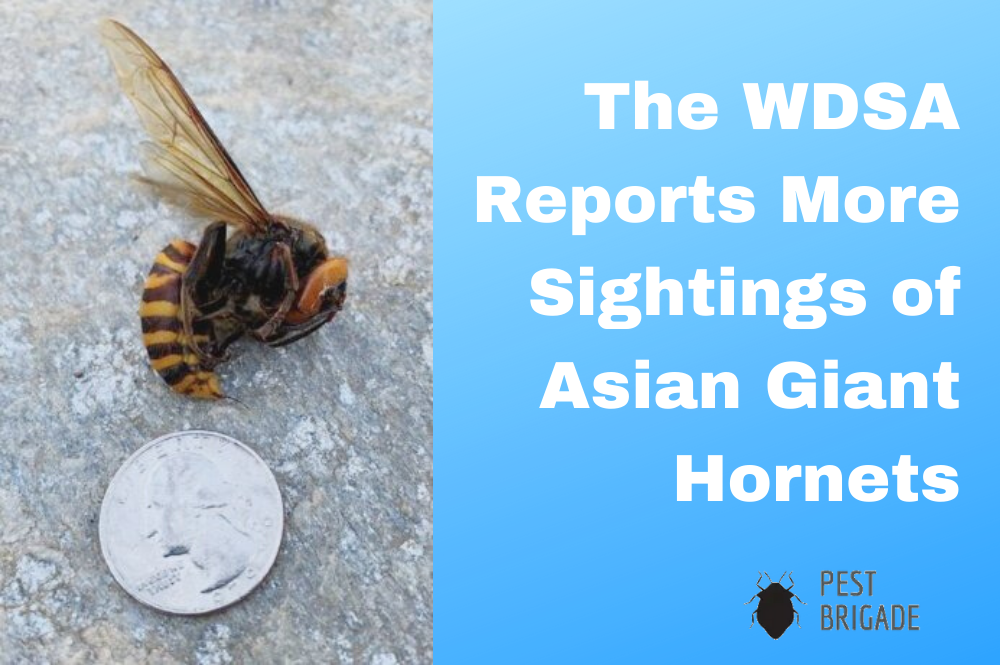 May 29, 2020, the Washington State Department of Agriculture (WSDA) reported more sightings of Asian giant hornets, or “murder hornets” as they’ve been popularly deemed. The WSDA has been keeping close tabs on all sightings since the start of the invasion when reports out of Nanaimo, British Columbia started in 2019.

The Asian giant hornets were first spotted throughout the Pacific Northwest in parts of British Columbia and Western Washington. The Asian giant hornet invasion has put fear into many throughout the US and Canada. Thankfully, the hornets are not known to be aggressive towards humans. It does, however, cause concern for those who rely on bee life to sustain their business and environmentalists everywhere.

UPDATE: As of June 2, 2020, the USDA reviewed the specimen and found that it was a dead queen.

The WDSA asks the public to continue reporting all suspected sightings. If you find what you believe is a “murder hornet” please do not attempt to kill the specimen. If the specimen is dead, take a picture and put the hornet into a plastic bag, then report the sighting to the WDSA.

Asian giant hornets have been easily mistaken for other species and even harmless bees.

The WDSA does not recommend everyone trap Asian giant hornets, as the process is a time-consuming commitment that could potentially harm essential pollinators. To read more about trapping Asian giant hornets, or if you have concerns over the invasion, check out our interview with the WSDA.

Are Asian Giant Hornets a Threat?

Yes, they do pose a threat to our ecosystem and can harm bees. However, they do not target or attack humans unless provoked. Asian giant hornets do nest in the ground, so please use caution on hiking trails if you live in lower British Columbia or Western Washington.

The US’s National Department of Agriculture had this to say:

As the national and Washington State departments of agriculture work together to track and report all known sightings, they ask the public to remain calm and report any suspected sightings.

Pest Brigade will continue to work closely with the WSDA to keep readers informed on all sightings as they’re reported. If you have a bee or hornet infestation that is concerning, please contact the WDSA or call one of our partners who can assess the situation.