How To Get Rid Of Wasp Nests (The Definitive Guide) 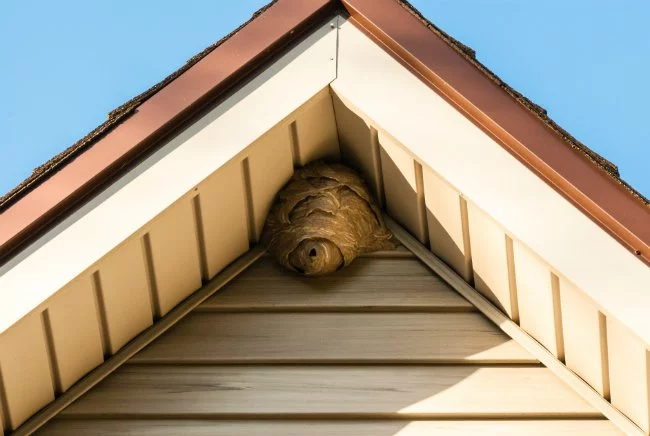 In this guide, we will tell you how to get rid of wasp nests for good, and what you can do to prevent them from happening.

Wasps are small, winged creatures that come from the same ancestral family as bees and ants.

Unlike honeybees, which die after a single sting, wasps can sting humans or animals multiple times and be perfectly fine.

This makes wasps particularly annoying and hazardous if they’re on your property.

Wasp stings can hurt, cause swelling, and can have potentially dangerous consequences for anyone that is allergic. And, wasps build their nests in large numbers, so once you notice a wasp nest attached to your home, you know you have a severe problem.

Keep reading for the definitive guide on how to prevent wasps from colonizing on your property, and how to get rid of wasps and wasp nest removal if you already have a wasp problem.

Types of Wasps That Build Nests

Wasps build nests as a home for their colony so they can expand their population quickly. Some nests are large and sophisticated, while others are small and intricate. Each wasp species builds a different style of nest.

Paper wasps get their name as they love to use papery material to build their nests.

This type of wasp builds nests that are typically smaller than the size of an adult hand.

The nests are gray, resemble paper mache, and have miniature open cells that look like honeycombs.

A paper wasp nest is usually umbrella-shaped. Paper wasps typically build their nests in secluded areas such as the edges of the roof of a home, barn, or attic space.

Yellowjackets are also known as ground bees because they love to build nests in burrows in the ground or wall cavities.

Similar to paper wasps, the yellowjacket nest is gray and looks like paper mache. Yellowjackets create closed-off nests with a single entrance point.

Hornets also build a paper mache-like nest, but it’s typically spherical. A hornet nest will range from being the size of a football to the size of a basketball.

Hornets love to build their nests inside bushes, trees, wall cavities, or attics.

Dirty daubers create nests that look like they’re made of mud and are typically shaped as multiple cylinders lined up in rows.

Most commonly, dirty daubers build their nests on the wall of homes underneath the roofing.

How Wasps Build Their Nests

To build their nests, the process begins with a wasp queen finding an ideal location for the nest.

Next, she searches for nearby sources of wood, such as logs, fences, trees, and cardboard. The queen has very strong jaws that allow her to scrape off some of the wood fiber to use as building materials. Then, using her saliva, the queen breaks down the wood in her mouth into soft paper pulp.

She then takes this pulp to the chosen site and begins the first few steps of building the nest.

The worker wasps take the paper pulp material and form it into hexagon-shaped cells. As the pulp dries, the nest begins to develop.

Watch for signs of wasp nests in these common areas:

How to Prevent Wasp Nests

Seal Up Your Home

Most importantly, homeowners should protect their homes by sealing up any cracks in windows or doors. These are both entry points to your home and provide space for wasps to build their nests.

Related: How to Get Rid of Bed Bugs

Make sure you eliminate all food sources for the wasps. Keep a tidy home, clean up spills and crumbs, and keep a tight lid on your trash.

The queen wasp will try to scout for a location for her future nest to home her adult wasps.

Eliminate her choices as much as possible by trimming back bushes, shrubs, and trees. Additionally, you can put up a decoy nest.

Wasps are territorial and tend to avoid building a new nest close to an existing one.

You can take some preventative measures to keep wasps away. Make a natural remedy at home using vinegar or some essential oils. Spray the concoction in the areas around your property where a wasp would naturally build its nest, such as the eaves of your home or trees.

How to Remove Wasp Nests

Wasp nest removal can be tricky. The first thing you’ll want to do is identify how large the colony is and how aggressive they seem.

The most effective method recommended by professionals is to spray wasp killer on a wasp nest at night time, because they will be less aggressive and are less likely to sting you. Do not stand directly underneath the wasp nest as you spray it.

Tip: when using a spray to destroy nests, it is a good idea to do so from a safe distance. When you are finished, wash your hands and any exposed skin with warm, soapy water.

A few things you should do to stay protected while removing a nest yourself: wear protective clothing such as a hooded shirt or sweater to cover your arms and head, as well as pants. Gloves and eye protection are also recommended.

If you think the nest is small enough to tackle, you can purchase wasp traps.

These traps typically lure a wasp in with the smell of food and prevent it from getting out.

Related: How to Get Rid of Fleas in the House

However, for an already established nest with a large population, even several traps won’t rectify your problem.

Some common “don’ts” when it comes to removing wasp nests include:

If your wasp nest seems large or aggressive, it may not be the time to DIY. Wasp nests can get quite large.

In Alabama, one wasp nest grew to be the size of a Volkswagen Beetle car and had over 15,000 wasps.

The most efficient way to get rid of wasps is to hire professional pest control services.

Eliminate the risk of getting stung or aggravating the hive and allow subject matter experts to handle the problem.