Gophers vs. Moles – What’s the Difference? 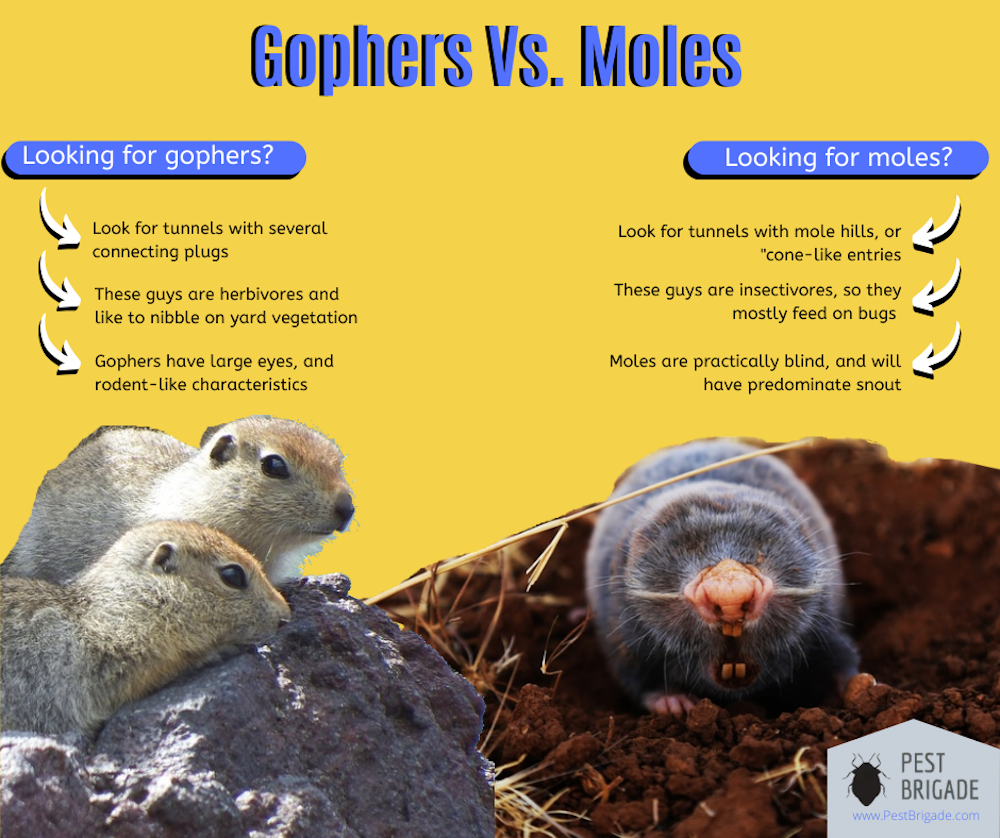 Moles and Gophers are very similar creatures. They disturb your garden by making deep tunnels and holes.

However, there are a few differences between them. Figuring out the differences in gophers vs. moles can help you get rid of them faster!

Gophers are rodent-looking herbivores, and can be active all throughout the day. The only time they typically will stop or slow down burrowing is during the colder months of the year. They can grow between 5 to 14 inches long, depending on the species and region.

Gophers don’t have the same prominent snout as a mole, but do have larger eyes and teeth.

These plugs are around 10 to 20 inches in diameter. Gophers will burrow in firm and tough soil that can maintain their tunnels. If you see a tunnel entry with “fluffy” or fresh dirty, the gopher is still burrowing.

Because gopher are herbivores, another sure-fire way to tell you have them is to see if your plants, shrubs, trees, and other vegetation is damaged or eaten.

Moles are practically blind insectivores. They only grow to about 6 or 7 inches and have a prominent snout.

This means that they feed on different insects and parasites in the ground.

They’re rarely seen by humans, as they don’t really need to leave their tunnels too often.

Some people don’t mind having moles in their lawn, as they can help get rid of other infestations that are attacking your garden. But, moles also don’t care about the look of your garden and lawn, and will make tunnels that can destroy it.

To look for moles, search for “cone-like” entry points, or mole-hills in your lawn. Their tunnel entries are around 2 inches in diameter, and are around 16 to 18 inches deep. Moles like coarse soil, and don’t make nearly as many tunnels as gophers.

Also Read: How To Get Rid of Moles In Your Yard